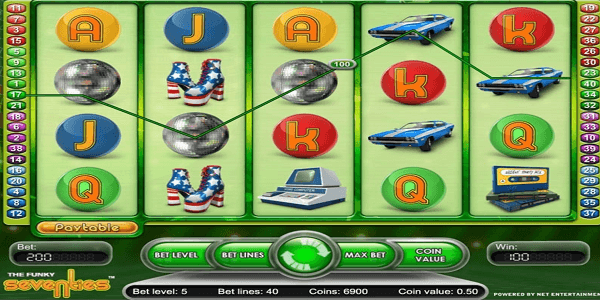 The Funky Seventies is a video slot game that will get you in the mood for some 70s vibe, along with all the tropes that this era has brought forward, like mix tapes, big boots and glitter balls. Fancy sports cars and gadgets like the very first computers have become prominent during this decade, along with other stuff which might be considered outdated nowadays. Though the times for big hairdos and colorful clothes have passed, there are still plenty of things that are still popular nowadays.

By playing the following game you may get an opportunity to relive the nostalgia of the 1970's, provided that you were along for the ride throughout these years. The NetEnt slot will bring a great combination of bonus and action, well suited for any given time. This 5 reel based video slot has 4 separate rows and as many as 40 different lines to match the symbols more easily. Stacked Wilds and Free Spins are always present, just as are substantial winnings that may go up to even 200 000 in total. Expect to be amazed by what Net Entertainment has provided here, just as in any other game that bears the same visual display of graphics, like for example: The Groovy Sixties, The Super Eighties, Jimi Hendrix, Guns N' Roses or Mega Fortune Dreams.