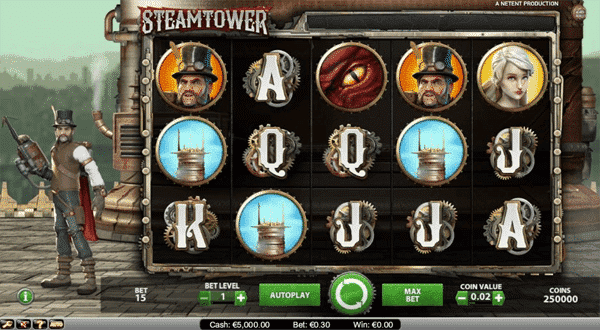 Steam Tower is a highly innovative and unique video slot, devised by the NetEnt software and available at various online casino websites. The game features a protagonist that aims to climb the titular tower that is powered by steam energy, in order to save a lady and defeat an evil dragon on his way to the top. The product heavily draws inspiration on the industrial revolution and its era, when such intricate machines have been created and everything was powered with steam. As many previous slot-based games, the following production is also set up with a 5 reel built and 3 row distinction, whereas 15 bet lines work toward increasing the eventual winning potential.

With such promising feature, the many objectives of the game will take the players through many dangerous obstacles, filled with additional help from Increasing Multipliers, Free Spins and Stacked Wilds. Much like the other popular casino gems such as Boom Brothers, Crime Scene, Neon Staxx, Secrets of Horus and Wild Rockets, the game would bring tons of fun to play and a reasonable amount of awards to be won during the encounters. Steam Tower is a great pick if one is especially drawn to this kind of theme, but all players are about to appreciate a significant improvement in graphics and dynamic animations of this game.