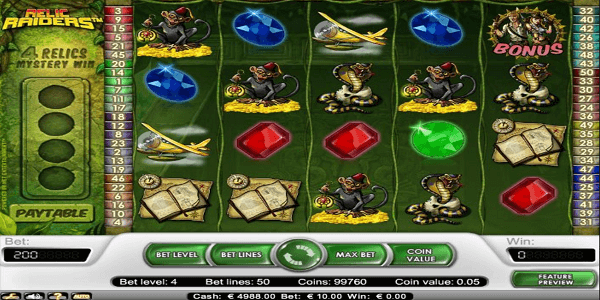 Relic Raiders is an influential video slot game that has been successfully released from the Net Entertainment production line a few years back. This wonderful casino game has made quite an impact on the community of online players, with its visually pleasing exterior and a theme spanning over many popular tropes, including obvious ties to the Indiana Jones series of movies. Just as the title clearly suggests, the players take matters in their own hands by venturing on an excursion filled with dangerous adventures.

From tropical jungles to scorched deserts, the Relic Raiders follow possible clues and track all kinds of artifacts left by long forgotten, ancient cultures. The players will also be rewarded for their efforts, as instead of virtual relics, they are bound to receive free spins, trigger scatter and wild symbols, combine multipliers and enter special bonus games. This completely digital slot machine has been developed by NetEnt’s own technology, based on the software architecture used in previous games from this genre. That means a familiar display of settings and buttons designated for customizing optional features before each spin. If you love adventure and games inspired by myths and legends, then you may also find these games just as intriguing: Secrets of Atlantis, Pyramid: Quest for Immortality, Lost Island, The Wish Master, Fortune Teller.