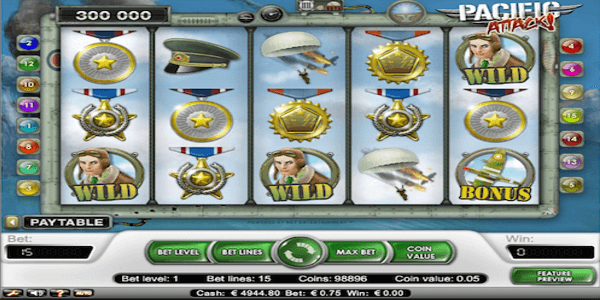 Pacific Attack is an action packed video slot game from NetEnt, influenced by the air battles of planes that took place over the pacific ocean during World War II. Fans of war games would be particularly pleased with the detailed depiction of various elements coming from that era, including medals and trophies from both sides of the conflict. Even though the purpose of this slot machine is purely entertaining, there are still lots of concepts that draw inspiration from the battles that have taken toll on humanity as well as the entire world throughout the 20th century. The video slot itself has been created upon the software architecture previously introduced by Net Entertainment as part of its series of standard video slots.

That means a familiar interface and a gaming environment that would certainly appeal to both new users and experienced casino visitors alike. Pacific Attack is a game that might not necessarily appeal to the general audience, but fans of the genre as well as its underlying theme would definitely come to appreciate it as it is. There is even a bonus based on the classic Battleship game, as an extra feature that is sure to make the activity more rewarding. More games of this kind can always be found on websites powered by the same software developer, including slots like Viking’s Treasure, Reel Steal, Tales of Krakow, Fruit Case, Subtopia and others.