Casino Ventura has just announced its updated promotional packet for the upcoming days of summer. Join in the big unraveling of daily offers on the Ventura website, filled with splendid opportunities to grab some of the free goodies and play top casino games. Between the 3rd and 28th August, new deals are going to emerge so stay tuned for more information, but in the meantime check out the events already planned for the next few weeks. Be mindful that some of the campaigns might intertwine with each other. 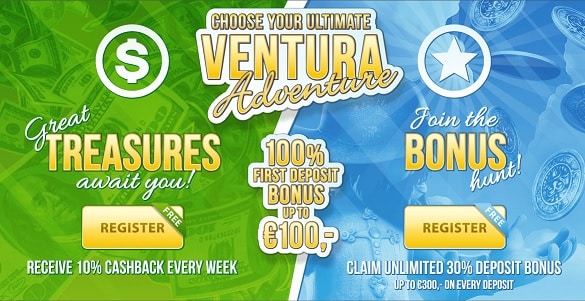 3rd August: Multiple online games are being released, covering an entire gamut of casino software, provided by such highly acclaimed studios as Microgaming, Betsoft and GameArt: “Karaoke Party”, “Monkey Keno”, “Charms and Clovers”, “Viking Age”, “Storming Flame”. Some of them would be available on desktop computers, others on mobile devices, while most of them are bound to support both platforms simultaneously.

5th-11th August: Get ready for the start of the Ride Live Roulette Promotion Week 1 and find out just how exciting the rollercoaster can really be. Throughout this iteration of the campaign, the players are able to win a VIP trip to Spain, to witness the glory of PortAventura and the treasures it holds. There are also free spins for “Theme Park: Tickets of Fortune”, so remember to play 20 spins on Theme Park, in order to qualify for these events by getting a single entry ticket as well as the extra 50 Free Spins in this slot all along. There is a maximum of 50 free spins that a user can get during one day. All winners would be contacted on the 13th of August.

6th-21st August: The Olympic promotion is finally going to hit the scene. Everyone who deposits €20 will be receiving 20 Free Spins on the “When Pigs Fly” video slot, the latest NetEnt game. These spins would be wager free and are being credited within the next 24 hours since they have been successfully claimed. The offer can be used once a day.

16th-22nd August: Obtain a ticket for the Ride Live Roulette Promotion Week 2. All participants will get a chance to win one of the available six GoPro Hero4 items, each of them worth €500, plus there would also be daily Free Spins on “Theme Park: Tickets of Fortune”. Play at least 20 real money rounds in Theme Park and you will qualify for the event. There is a maximum limit of 50 tickets that can be acquired during a single day. Winners of this competition will be contacted on the 24th of August.

25th August: A new game is being released and this time it would be NetEnt's “Secret of Atlantis”. The slot will be available on mobile as well as on desktop devices.