Tivoli Casino is ready to launch a spectacular new promotion that is going to fill the hearts of all participants with hope for many victories that lie ahead of them. The campaign would take form of the March Race, a dynamically unfolding competition where the stakes are high yet the winnings are even higher still. In order to secure your position and to become the one standing proudly as a winner on the final podium at the end of this thrilling challenge, all that has to be done would require simply making as many spins on various NetEnt video slots during the period of the current promotion.

No matter if you are a new player or an already existing one, because all are welcome to take part in this racing event, where multiple rewards are waiting for the 20 winners who manage to reach the top of the leader board. Accumulate as many spins as you possibly can, as there are plenty of magnificent awards for achieving that, such as real money prizes and no-wager free spins. Follow the currently featured page of this event, where more information on the race just as well as the current leader board of potential winners can be located and tracked in the future. Remember that the more you play, the better chances you eventually get at reaching the finish line as the ultimate winner. 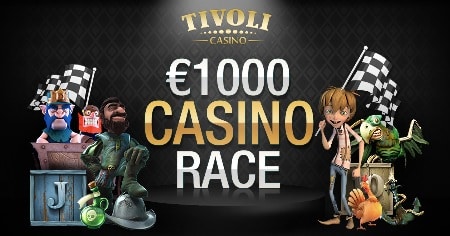 * A minimum spin value that is required on video slots during the following promotion: €0.20/spin

* Those placed on positions 4th – 20th, may expect to be rewarded with no wager free spins