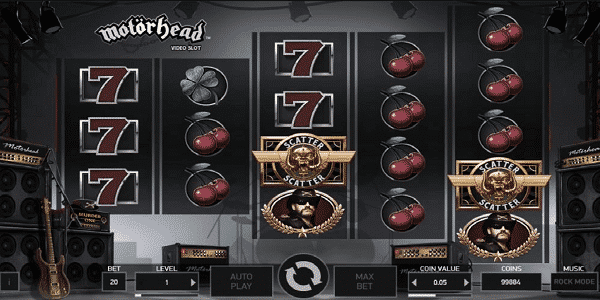 Motörhead is not only a legendary hard rock and heavy metal band, but also the next in line video slot game on which NetEnt is currently working on. This sound bursting piece of software is going to be released already on the 22nd of September 2016, so prepare for a real blast of intense gaming accompanied by smashing guitar riffs and hardcore drums. The Motörhead video slot is the third and final entry in the long running NetEnt Rocks series of slot machines inspired by music. If you are a fan of the rock music genre or just simply love all Net Entertainment games, then you are in luck, because the next one would be quite something.

There is no doubt about it that this amazing production is going to be an instant hit, just as the previous two slots have already become. The players can already try their luck with either Guns N’ Roses or Jimi Hendrix, as those two artists have already been immortalized in a slot machine form by the long running gaming expert. Featuring the Mystery Reel, Bomber, Wild Substitution and Free Spins, the 5 reel and 76 lines based slot is going to bring back the glory of the early metal days, with a rocking soundtrack at that too. In the meantime, check out some of the other games from the online lobby: Pacific Attack, Wild Water, Silent Run, Excalibur or Steam Tower.