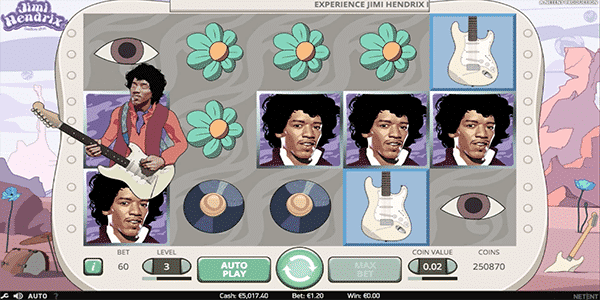 Jimi Hendrix is the upcoming NetEnt slot that will introduce one of the most popular rock & roll musicians of all time. Based entirely on a theme that focuses on the music made by Jimi Hendrix, the video slot is going to be the second one in its course of rock infused video slots, the first one being Guns N' Roses and the next one going to be Motorhead. There are still plenty of amazing features to be found, just as in most popular games developed by Net Entertainment up to date. One might certainly expect to be treated with all the hits and singles that Jimi Hendrix have created during this short but successful carrier.

Fans of the artists and slot machine in general, are going to be in for a treat with this game, especially when both audio and visuals are being conceptually designed to serve the exact purpose of this entertaining production. Once the game is released, there will be lots of additional stuff to resort to at every turn, starting with the bonus concepts and additional stuff that is likely to follow afterward. Merging two with three dimensional graphics works really good for this kind of software, which is certainly going to be released real soon, just like the previous games already have been.