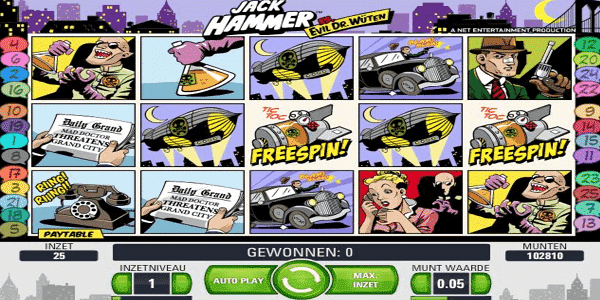 Jack Hammer 2 continues the story of a private investigator who takes on various jobs, as often dangerous as the criminal world in which the game takes place. This NetEnt based video slot features a classic neo-noir detective story, which mostly takes place in the US during a prohibition era, where criminal activities by eponymous gangsters where particularly highlighted through media tabloids. As it can be expected, there is Jack Hammer, the sleuth and main protagonist of this game, accompanied by a beautiful singer and a cast of other characters, serving as tropes for this kind of story. The game looks really great, especially due to its incorporation of cartoon graphics in the manner of comic strips, quite popular in the early second half of the twentieth century.

Multiple bonus rounds can be fully expected from it just the same, with free spins and sticky winds a plenty. There are also random wilds and other betting combinations that would systematically arrive on the reels, to grace its players with a handful of additional options to benefit from. Net Entertainment is frequently releasing video slots of similar kind, so there is always something to look forward, as far as slot machines are being considered. One might even get back to the previous version of the game, titled simply Jack Hammer or play any other one, such as Kings of Chicago, The Groovy Sixties, Crime Scene or Scarface.