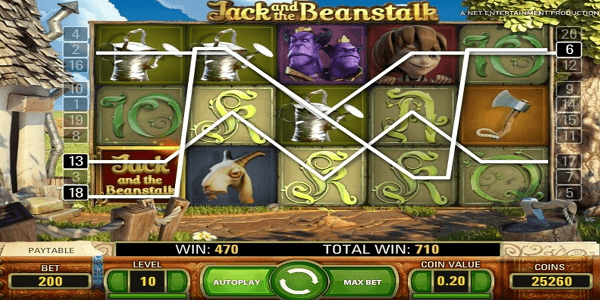 Jack and the Beanstalk Netent Slot Review And Details

Jack and the Beanstalk tells the story taken straight form a popular fable, about a young boy who traded his cow for three magical beans and planted them in his mother's garden. That is one version of many that further bring the details on how Jack reaches the giant's kingdom within the clouds, by climbing the beanstalk which have grown to gargantuan proportions during a single night. As one of the beloved children stories, it has proven to be perfect for making a video slot game out of it. Net Entertainment is already known for incorporation various elements from different genres of films and pop culture references, even former versions of video games or comic books.

That seems to be working just fine and with the installment of its three dimensional graphics engine, it would become one of the most successful NetEnt slots up do date. The product itself has a typical slot machine setup, which involves 20 lines and 5 reels, all that could be necessary in order to combine the objects and aim for the Treasure Collection of Free Spins, Walking Wilds, Stacked Wilds and other interesting features. Collecting the bonuses might seem like a task worth undertaking, especially when additional coins are being rewarded, so it should rather be a quite profitable undertaking on its own. There are always more games from this studio available at your own convenience, including EggOMatic, The Funky Seventies, Wild Water, Geisha Wonders and Flowers.

Visit Casino And Play Jack and the Beanstalk !!