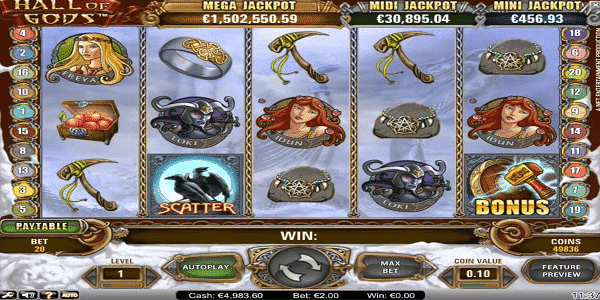 Hall of Gods is NetEnt's own take on Nordic mythology, where gods clash in battles for supreme dominance over the mortal world. The very core of this impressive slot machine revolves around the Norse myths as they are being told from the perspective of the gods themselves, so be prepared to meet the entire pantheon throughout the game. Featuring all the symbols of old and objects that belonged to those divine characters, like the well recognized Thor's Hammer or ancient runes scribed on multiple items.

There will be goddesses and gods like Freya, Idun, Thor, Loki and Odin, along with their respective signs. Apart from the fact that the game holds three jackpots and a lot of different possibilities to trigger them, it would also feature Pick Wins, Scatters, Expanding Wilds and other eventful items. This should definitely strike the fancy of many video slot fans who are looking forward to meet an interesting concept behind the Net Entertainment platform. Venture to Valhalla and meet the Midgard Serpent, while you uncover the mysteries of ancient prophecies and the power of of godlike creatures. If you enjoy mythological themes, then you would be pleased with other games like the Egyptian Heroes, Pandora's Box, Arabian Nights, Thunderfist, Secret of the Stones and all the rest.