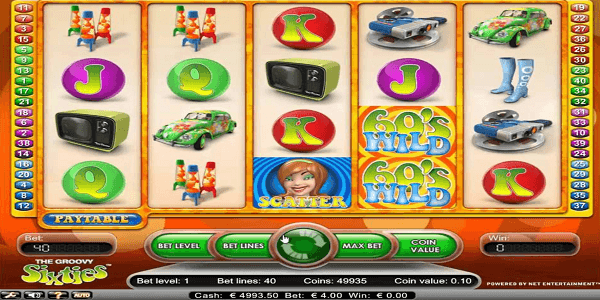 The Groovy Sixties brings back the era of the 1960s, when the time of hippies and counter-cultures were making an impact on the world of politics and social norms. It would be a great understatement to say that this decade had a little impact on how people perceived lots of things, and it makes perfect sense how it would carry on even half a century later. This classic video slot game was one of the many that brought NetEnt its current acclaim among casino software providers, which guarantees the quality and fun that undeniably makes the products much more enjoyable than usual.

The players can set the exact bet level for a more rewarding experience, set as many lines as they want and bet even the maximum amount if they wish to go all the way, after customizing the coin value of course. With so many popular tropes that were commonplace during the 60's, like for example lava lamps, audio tapes, colorful clothing, old television sets and buggy cars, the reels would be spinning with much ease, thus bringing an outstanding fun factor that comes with 40 lines, 5 reels and 4 rows. Net Entertainment has lots of other games like this: The Funky Seventies, The Super Eighties, Nrvna The Nxt Xperience, Tale of Krakow or Champion of The Track.