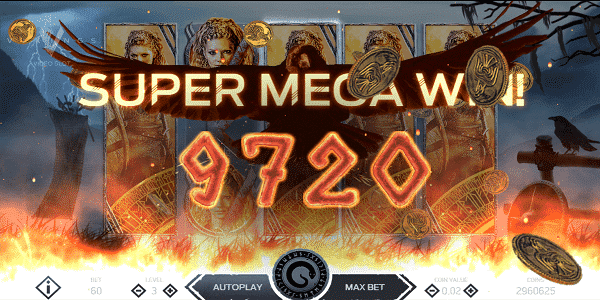 Vikings is the original NetEnt slot based on the license from History’s Channel own television series “Vikings”, which tells the many stories based on actual facts from Nordic long and bloody history. The game features all of the main characters from the clan of warriors vying for dominance among the battling Viking families. In order to survive, they had to use their wits, cunning, or even brute strength, as the times were harsh and people were dying by the hundreds; due to war, sickness, and other cruel factors of this reality. Fortunately, this is only a game, however it is deeply steeped in actual history, and even though the characters might be fictional – their stories are sometimes truer than life.

Thanks to Net Entertainment, you will now have an opportunity to try this brand new video slot, which has been based on the 5 x 3 x 243 framework, but can quickly expand to 7 reels, 5 rows, and a total of 78 125 betways during the Raid Spins. Aside from the latter, there are additional bonuses that players can trigger while playing the Vikings slot, some of which include the aforementioned Raid Spins, a Shield Wall Feature, Hotspots, and much more. With so many other Net Ent games already made available by the studio, you can choose between such online casino hits as the Wild Bazaar, Coins of Egypt, Fairytale Legends: Mirror Mirror, Warlords: Crystals of Power, Secrets of Atlantis.