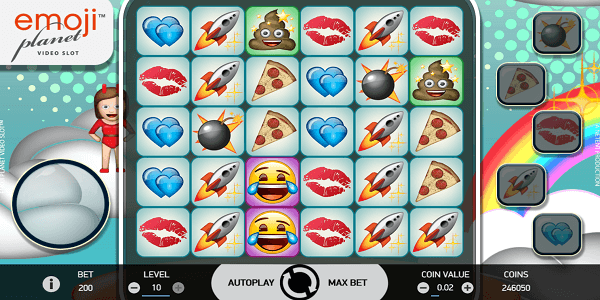 The Emoji Planet video slot is an interesting new game that is currently being developed by the NetEnt software company, which plans to release this product on the 23rd August, 2017. This original slot machine resembles a puzzle game that was influenced by some of the most popular emojis, guarantee to put a smile on every face during its run. The premise might sound simple enough, but you have to see it to believe that the Emoji Planet slot is going to become a great addition to the already huge library of other casino games. Emojis are smileys and specific ideograms that represent a particular mood or activity, spanning across multiple categories which cover expressions or even some of the more commonplace objects.

Originated on mobile phones and typically found in the Japanese culture, these little objects were a more colorful and advanced version of the popular emoticon, which also found their beginnings on cell phones. The video slot is going to have 6 rows and 5 reels, which is a rather unusual setting for a slot machine, but works perfectly well with its leading theme. The players will enjoy five original features during the game, starting with the Two Hearts Feature, Rocket Feature, Kiss Mark Feature, Pizza Feature and Bomb Feature. Some of the other Net Entertainment games include: Thief, Elements: The Awakening, Evolution, Wild Rockets and Space Wars.