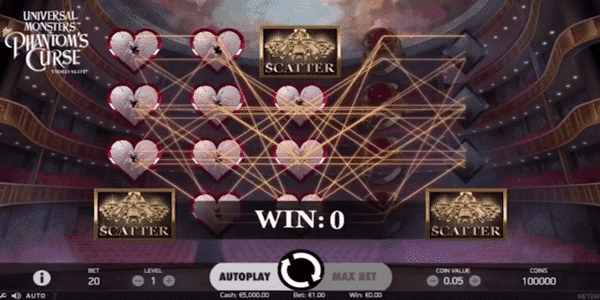 Universal Monsters The Phantom’s Curse video slot, is a new game coming out soon to every online casino run by the NetEnt platform. This classic tale of tragic love is going to deliver a visually stunning performance, alongside the amazing soundtrack which is going to make this opera influenced experience all that more enticing for the viewers. Follow the plot as the mutilated Phantom tries to win the affection of the beautiful singer Christine, taking the opera house to a next level of immersive storytelling. Set in the 1890s France, the story unfolds as the reels spin from one section of the game to the next, thus revealing pieces of the animated plot, which has been given an upgrade by the development team at Net Entertainment.

Universal Monsters: The Phantom’s Curse slot comes with 40 fixed lines, 4 rows and 5 reels, along with a lot of additional bonus features, which should make the gameplay even more intriguing than it already is. Sticky Wild Re-spins, Pick and Click games, Free Spins, Wilds, Bonus Symbols, Scatter Symbols, and Wild Substitutions – all can be encountered during this experience. The video slot is going to arrive really soon – on the 24th of January 2018, so make sure that you follow the events as they unfold during each of the stages built into this unique game. Before its global release, make sure to check out some of the other classics that will definitely appeal to your interest in this particular slot, such as The Invisible Man, Frankenstein, Dracula, or Creature from the Black Lagoon.