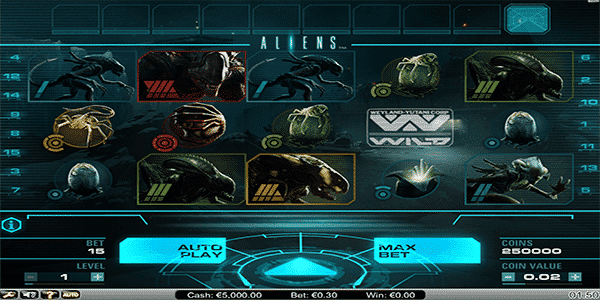 Aliens is not only a slot machine based on one of the finest science fiction flicks made in the history of modern cinema, but also a fantastic online game that makes the casino experience more thrilling than ever. The classic space horror movie has been made into a video slot game, all thanks to the combined prowess of both NetEnt and 20th Century Fox. That is quite a formula for success, granted that most of the concept would be intact afterward. The final state of the game is much more than this however, as a true masterpiece of a game has been developed, enabling new ways for the players to survive through hordes of xenomorphs.

The main protagonist of the game would be alone space marine that must go through a gauntlet of aliens and reach the Hive Queen, where all the monsters come from. That is no easy task and many will surely perish, but those who reach the top are able to win quite astonishing rewards. There are several levels to this game, filled with special encounters and a useful feature called the Alien Activity Meter. Much like the other popular Net Entertainment productions from the past, either Piggy Riches, Thunderfist, Hall of Gods, Excalibur, Jack and the Beanstalk or any other, Aliens seems like a perfect choice to get acquainted with the slot genre, especially the one based on cult films.